The following passage is a list of famous courtesans from Greek history. It is interesting to note how Sappho is treated; just like her entry in the Suda, this author simplified her complex history and impact by splitting her into two identities: a revered poet and a lusty entertainer.

There was a courtesan from Eresos [city in Lesbos] named Sappho, just like the famous poet, who loved the beautiful Phaon. She was famously discussed by Nymphodorus in his Travels Around Asia. Nikarete, a courtesan from Megara, was not quite born in poverty; instead, she was born from a noble lineage and had a great education, and even became the philosopher Stilpon’s student. [The Olympic victor] Bilistiche, a courtesan from Argos, was also highly respected; according to the authors of Argive History, she was descended from Atreus’ dynasty.  The courtesan Leaena was also quite famous. She was the lover of the tyrant-killing Harmodius. Even when she was tortured by the tyrant Hippias, she died without betraying [her lover]. 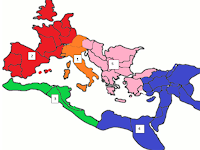 Athenaeus was a scholar who lived in Naucratis (modern Egypt) during the reign of the Antonines. His fifteen volume work, the Deipnosophists, are invaluable for the amount of quotations they preserve of otherwise lost authors, including the poetry of Sappho.